Mobile app mAadhaar helps  holders of Aadhaar number  to carry a soft copy of the biometrics-based identity card and other demographic  details in their smartphones. In other words, it is a “convenient way to carry Aadhaar number with demographic details anytime, anywhere”, according to UIDAI or Unique Identification Authority of India.   mAadhaar is an official mobile application developed by  UIDAI. The mAadhaar app can be downloaded from Google Play Store.  In case of those having any issue or query about mAadhaar can write to feedback.maadhaar@uidai.net.in, UIDAI said. 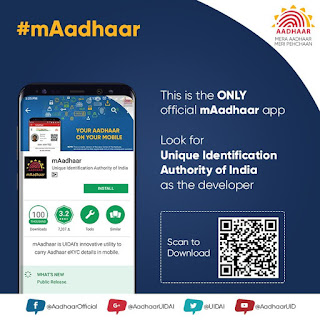 10 Things To Know About mAadhaar
1) The mAadhaar app asks for password as soon as it is opened.  User should enter a password of length 8-12 characters. The password should contain at least 1 number, 1 alphabet, 1 special character and 1 alphabet in capital letters: Sharma@123, for example.
2)  An Aadhaar profile can be downloaded only on mobile devices having the mobile number linked with your Aadhaar. A user can create a new profile by entering the Aadhaar number manually or by scanning the QR code on the Aadhaar card.
3) In case your mobile number is not registered with Aadhaar, visit the nearest enrollment centre/mobile update end point, according to UIDAI.
4) There is no provision to manually enter the OTP in mAadhaar. This is a security feature.
5) Users are advised not to navigate from the mAadhaar app while it is waiting for an SMS. mAadhaar automatically reads the OTP (one-time password) once it is received.
6) The mAadhaar app enables users to carry details of more than one Aadhaar card in the digital form.  If any other member of your family has the same mobile number registered as yours with Aadhaar, you can also add his or her profile using the mAadhaar app. The app allows a user to add a maximum three profiles in digital form on a particular device.
7)  Once a user enables the Biometric Locking system, his or her biometric remains locked till the Aadhaar holder chooses to either unlock it (which is temporary) or disable the locking system.
8) One Aadhaar profile can be active on only one device at a time. If you create a profile on another device by inserting the SIM in another device, the previous profile would become inactive and would be deleted from the older device whenever any operation is attempted within the mAadhaar app from that device.
9) Sharing of QR code and eKYC data: A user of mAadhaar can share demographics-related information with service providers using the QR code, instead of manual entry.
10) mAadhaar comes with TOTP or Time-based One-Time Password generation feature.  Users can use this automatically generated temporary password instead of SMS-based OTP.
mAadhaar app can be downloaded from Google Play Store:
https://play.google.com/store/apps/details?id=in.gov.uidai.mAadhaarPlus